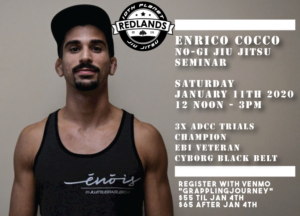 In 2019, we were fortunate to host some insanely awesome seminars by so many high level instructors and practitioners.

For our first seminar of the year, we brought in Budo Jake, owner of BudoVideos.com and Instructor at O.C. Jiu Jitsu. He showed us amazing submissions, inverted style attacks, and some gotchas that you wouldn’t expect to get caught in until it happens to you. When he’s not creating videos and apps, he’s out there teaching seminars and even Acroyoga!

Toward the Spring we were blessed with solid technique from Sean Bollinger, AKA Slimer. Bollinger is a 10th Planet Jiu Jitsu pioneer. It was awesome to see Eddie Bravo’s second ever blackbelt, fill the minds of newcomers to jiu jitsu, as well as the multitude of blackbelts on the mats.

For our 1 year anniversary, we hosted Vinny Magalhaes for seminar. The BJJ and 10th Planet Jiu Jitsu black belt, is not only a Black Belt World Champion, but an ADCC Champion as well. It was definitely a blessing to have knowledge dropped on us by such a high level talent- Syndicate MMA’s own, Vinny Magalhaes.

When ADCC came to town, Stuart Cooper was nice enough to come down to Redlands to drop knowledge. Stuart, another high level practitioner, has been a jiu jitsu instructor at Evolve MMA in Singapore, head BJJ instructor at Tiger Muay Thai in Phuket, Thailand, and now heads the Jiu Jitsu at Diaz Combat Sports in Vancouver, Canada. So far him to take time out of his busy schedule to teach us his crafty jiu jitsu pressure style, is an honor!

Toward the end of 2019, Geo Martinez showed us why the Freaks Don’t Sleep- they’re always creating with wild styles. Geo, on 10th Planet Jiu Jitsu’s top tier of grapplers, showed us crazy technique. It was Thanksgiving time, and we were thankful for sure. The 10th Planet Oceanside head instructor and 10th Planet Freaks leader delivered key concepts to his current jiu jitsu game.

We aren’t stopping in 2020. It’s a new decade, and we have so much talent to share with the community, our students and our extended jiu jitsu families. First on the list is Enrico Cocco from Zen Jiu Jitsu Miami. Enrico is the Underground King, known in the jiu jitsu circuit, before the advent of Social Media. This Saturday, 11 January 2020, you will get a glimpse at his technical prowess on location at 10th Planet Jiu Jitsu Redlands.