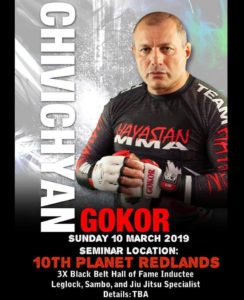 With over 100 affiliations around the world, 27 years teaching LAPD, many years teaching Sheriff, Special forces and Army, and over 400 students at his own academy in North Hollywood, Gokor Chivichyan has taught the gamut of students. Many seek his training from around the world. At 56 years young, and armed with a Jiu Jitsu and Judo Black Belt, this year Gokor plans to compete in the Judo Worlds, Sambo Worlds, Jiu Jitsu Gi Worlds, and the No Gi Jiu Jitsu Worlds.

10th Planet Redlands: How long have you been training martial arts for?

Sensei Gokor: I’ve been training since I was 5 years old. That’s a total of 51 years. The very first art I trained was wrestling. I wrestled for over 9 years. During my time wrestling, I started sambo and trained for 4, maybe 5 years.

Then I started training judo. The judo I’m talking about is called Kosen judo, basically what Brazilian Jiu Jitsu is today. I trained judo for 7 years then they changed to Kodokan judo to focus on going to the Olympics.

10th Planet Redlands: Do you like stand up fighting or ground fighting more?

Sensei Gokor: I like them both, but my favorite fighting is on the ground. I started to learn Kokh, which is an Armenian sport, popularized in Armenia many years ago.

When someone wanted to marry a girl they had to wrestle a male from the bride’s  family. It didn’t matter if the groom Won or Lost, he just have to do it to show he is a man. This was the tradition. Most of the leglocks I know I learned from Kokh. [According to Wikipedia, Kokh (Armenian: Կոխ) is the Armenian national wrestling, known since the Early Middle Ages. It’s considered to be one of the oldest forms of wrestling. It had influenced the Soviet martial sport Sambo.]

10th Planet Redlands: Where does Sambo fit in?

Sensei Gokor: Sambo came from this. First you had Kokh then you had Sambo. Sambo translates to fighting without weapons. The Russian military mixed Judo and wrestling, and adapted leglocks from Kokh for the martial art Sambo. When you wear the jacket uniform and take away striking, this is Sport Sambo.

10th Planet Redlands: Can you talk about your experience with the Olympics?

Sensei Gokor: As I mentioned, I love groundfighting, so I continued to train Kosen judo since they allowed heelhooks.

But in 1977 I started to train Kodokan judo so I could make the 1980 Olympic team. I became the Soviet National Champ, then in 1980 to decide who would go to the Olympics to represent Russia, I had to compete against the Georgia World Champion, and he won by a point and went on to win Olympic gold. I was 16 or 17, and he was 10 years older, so I knew in 1984 Olympics I would have a good chance to win Gold.

I later move to Los Angeles. In LA, I had one more chance to make the ‘88 Olympics. Even though I was considered a Soviet National for the Olympic team, the US wanted me to compete for America. I didn’t know about the point system and qualifying for the team based on points.

I was able to face the Olympic Gold medalist in the US Open, 3 months later. We met in the finals and I was able to beat him in 15 seconds. A small redemption but that was enough for me.

10th Planet Redlands: How did you and Gene LeBell become friends?

For spent the first 6 to 7 months looking for a job. I didn’t really know what to do. I figured I’d move to Los Angeles. I was at LA City College looking for a place to jog. That’s when I saw people in their uniforms practicing some form of martial art. I went over to try to talk but my English wasn’t good. I could see that they were doing catch wrestling, and judo, but no jiu jitsu. This was 1981. There was no jiu jitsu at the time that I know of.

I was just observing and the Gene started talking to me. I didn’t understand, so I just said, “No English.” And I left. I was young like 16 or 17 at the time.

The next day I brought my cousin with me to interpret. Gene said he recognized me from a tournament I competed at in Colorado and he started saying good things about me. Gene’s strongest guy was the “Russian Bear.” Igor was Russian Bear’s real name. He was 28, and about 225-230 lbs. I was only 160 at that time. Gene asked me, “Do you want to wrestle with Russian Bear? “

I grappled Russian Bear, took him down and secured an armbar. I think I got Bear angry so we went again, and again. Every time I beat him. Gene was surprised. I did well against everyone else,  some of whom were Olympic level competitors. No one believed I was 16 or 17.

I told Gene LeBell I wanted to fight. So in the 80’s, Gene would enter me in “Winner Take All” underground fights. They were No Holds Barred fights like the Blood Sport movie. Something like that. This was the early 80’s, again no BJJ or MMA, just No Holds Barred fighting. I was also invited to Japan for Shooto in 84, and a 16 man tournament in Japan. We won those.

10th Planet Redlands: What is your experience with the UFC?

Sensei Gokor: In the 90’s, I was heavily involved in training many fighters for the UFC at our Hollywood location. I think I helped 23 fighters in the UFC. There were so many fighters coming to us because they realized they needed grappling in Mixed Martial Arts so my location became very popular.

One of the reasons I didn’t compete in the UFC was everyone was coming to my dojo to learn, so it was hard to be a teacher of a student I could potentially fight. But these students did so well in their fights, so I was happy I was doing something right and proving my technique worked at the highest level.

Who were some of your students? 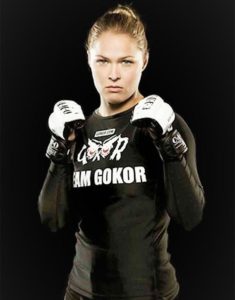 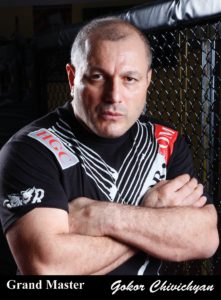 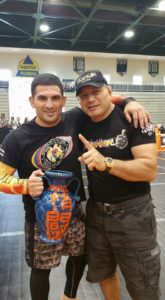 Sensei Gokor: The day I came to America, I told everyone learn leglocks. I was getting leglocks on people and breaking their legs in less than 20 seconds, because they didn’t know what leglocks were, and didn’t know to tap to leglocks. They were a very new concept in the US in 1981.

I had done 7 years boxing in Armenia, 4 years of Thai boxing in the USA, so that I would be able to understand standup fighting. But I loved ground fighting. It was too easy to just hit someone, let them fall to the ground and just finish them there.

10th Planet Redlands: How have leglocks progressed from then?

Sensei Gokor: 35 years ago, I told everyone the day will come you guys will die to learn. Better to learn now than later. I made a dvd about Leglocks to spread the knowledge of what I know.

10th Planet Redlands: Were you the first person in the US to do leglocks?

10th Planet Redlands: What do you think of John Danaher’s and Eddie Bravo’s leglock teachings?

Sensei Gokor: They are good. The techniques are working at the highest levels. That proves they are good.

ON THE BEST STUDENTS

10th Planet Redlands: What are the characteristics of your toughest students?

Sensei Gokor: Everyone is different and everyone has different talents. Of course just what I teach them is not enough. They have to have talent to rise to the top. If you have a 100 students, not all 100 do well. Maybe 3 out of 100 do exceptionally well, then out of the 97, 20 are good, and the rest are working to get good.

Students like Karen, Karo, Harout, and Manny all are tough students. They each have factors that can win a match. I can say each of my 160 black belts for certain are killers. To be a Hayastan Black Belt you must know grappling, judo and sambo at the highest level.

I teach them what I know about striking but I don’t consider myself a striking coach. Benny the Jet is their kickboxing coach. Roman  Kamazin is their boxing coach. There’s 11 coaches at the academy and all of them are legends that create tough students.

My number is on my website. I never ignore anyone. I don’t have a secretary so I’ll always answer.

For seminars throughout the world go to the Seminars section. The “Open To The Public” seminars can be found at our seminars page here: https://www.gokor.com/copy-of-fees-schedule

2 thoughts on “On Gokor Chivichyan. Here’s What You Didn’t Know About The Armenian Assassin. (interview)”