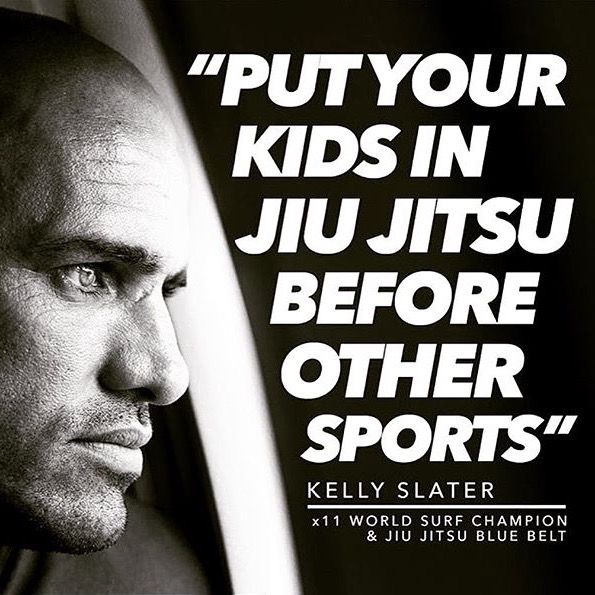 They’re sports juggernauts, music superstars, and renowned actors and comedians. They’ve perfected their craft to earn themselves hefty incomes as well as international fame. Although they come from different walks of life, they can agree that Brazilian Jiu Jitsu promotes perfection while instilling humility.

1) Kelly Slater
Arguably the greatest surfer of all time, Kelly Slater is a record 11-time World Champion(World Surf League), having won 5 of those titles consecutively, from 1995 to 1998, another record.

Some of the reasons Slater says kids should train jiu jitsu before anything else are that it puts them in their place. If students are the top in the gym, they have to teach the other kids. If they are a lower level student, they have to learn from others. Any insecurities get worked out on the mat. This jiu jitsu experience is a metaphor for life because it’s a humbling experience and gives people confidence. With confidence comes less ego, ultimately resulting in more respect for others.

2) Demi Lovato
Singer, songwriter, actress, activist, Demi Lovato, has starred in television and movies, been a judge on The X Factor, and has received numerous awards for her music. She first fell in love with Mixed Martial Arts, and found her way to Brazilian Jiu Jitsu, one of the key components to MMA.

Demi, a jiu jitsu hobbyist, likes that jiu jitsu takes her out of her mind into a meditative state. It has made her stronger as a person because it’s given her more confidence. Her aim is to become a black belt someday and we believe this is totally possible.

He continues Brazilian Jiu Jitsu training and music production because the adrenaline rush and focus both provide.

Watch Rakaa and Dilated in action with their track, “Worst Comes To Worst.”:

4) Shaquille O’Neal
Shaquille O’Neal is on anyone’s top 10 list of all time greatest NBA players. And it’s not hard to argue. At 7 foot 1 inch and 325 lbs, he was a dominant force of nature. To his list of NBA accolades are 4 time NBA champ, 3 time Finals MVP, League MVP, 15 time NBA All-Star, Rookie Of The Year, and just about everything else an NBA player could aim for.

You probably knew that Shaq earned a Doctorate in Education, or that he is a Sheriff’s Deputy, or even the fact that he dabbled in music and acting a bit, but did you know Shaq trained in MMA and Brazilian Jiu Jitsu?

Watch Nate Diaz teach Shaq the No-Gi Jiu Jitsu Uchi Mata technique in the video below. Remember, if Shaq does this to you on the streets, you better have your will written:

Although Brand is just a beginner in Brazilian Jiu Jitsu(BJJ), he likes the notion that we house within us aggression and animalism, and that in BJJ there are moments where we need to apply a burst of aggression. He compares Jiu Jitsu to life. He attributes martial arts like Jiu Jitsu, to teaching us that life is a struggle. It’s how we cope with this struggle and what decisions we make when we are struggling that is important. He goes on to suggest that we must choose the correct moment to apply our aggressions versus simply, a higher energy state.

Brand’s full thoughts on BJJ in this video:

Let us contact you about training Brazilian Jiu Jitsu or Martial Arts in Redlands, California!