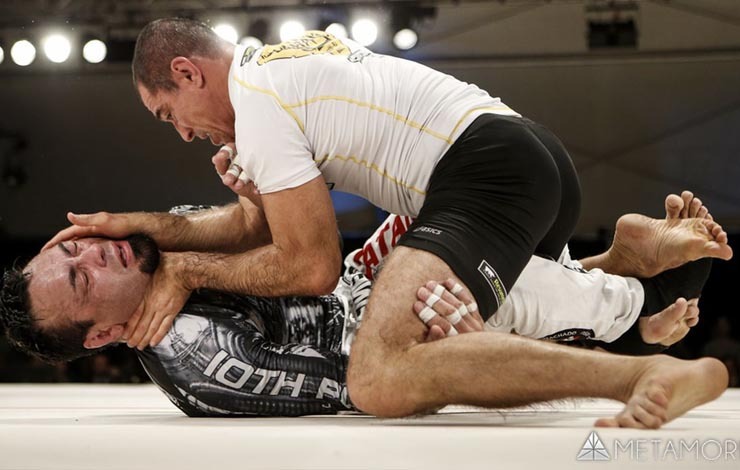 In grappling and jiu jitsu, the guard is essentially a position in which the practitioner is controlling his or her opponent using the legs.  One thing is certain: You’re going to learn many different guards during your jiu jitsu journey. The more you are exposed to the different guard styles, the more you will be able to switch between them, during your own sparring sessions.

Some common guards you will hear about in the jiu jitsu community are closed guard, half guard, butterfly guard, x-guard, z-guard, and open guard. Today we will go deeper into a specialized type of half guard known as lockdown half guard, or simply “lockdown.”

When you have your opponent in full guard, aka “closed guard,” they will typically want to advance position against you because, as closed guard gives your opponent an opportunity to strike you with elbows and punches, they too are in imminent danger as you can strike them, or worse, tap them out via submissions such as the armbar, kimura, triangle, or guillotine. So it’s usually in your opponent’s best interest to advance past your closed guard into a more dominant position, like half guard, side control or mount.

If your opponent finds their way past your full guard and into half guard, they will be able to strike and elbow you, as well as threaten you with submissions like the darce or guillotine. If you squeeze your opponent’s caught leg between your legs and triangle your legs on the outside of their leg, you have attained the basic half guard. It’s possible to pull off some sweeps from there, or work your way up to take your opponent’s back via arm drag, but your options are limited. You really only have control of your opponent’s upper body if you have some sort of clinch on your opponent using your arms. With only a body clinch, your opponent will eventually pass beyond your leg squeeze and on through to the side control position, a bad position for you to be in.

Visual detail of half guard to lockdown:

1) Lockdown to Vaporizer in MMA

In the King Of the Cage fight between Jacob Romero and David Converse, Jacob was able to secure the lockdown, reach behind David’s back and begin pulling his foot over his shin at a horrifying angle, and secure the devastating vaporizer submission and victory.

2) Lockdown for Survival in MMA

In the UFC 200 fight between Anderson Silva and Daniel Cormier, a wrestler, Cormier was able to take down and begin ground and pounding Silva. In an effort to stop the barrage of punches by Cormier, Silva secured the lockdown half guard and extended and contracted his legs, effectively getting Cormier off balanced. Along with Silva’s overhooks, underhooks and framing on Cormier’s arms, Silva was able to minimize the damage and survive to the next round, and another opportunity. If Silva secured the victory it would have been a triump for a fighter that took a fight on only 2 days notice.

In the much anticipated second jiu jitsu match between Eddie Bravo and Royler Gracie, after repeated attempts, Bravo was able to successfully secure the lockdown against Gracie, and the rest was history. Eddie followed “the path” all the way to the vaporizer. Although there was no tap and no winner, Eddie Bravo displayed the effectiveness of his style of jiu jitsu to the world and non-believers.

4) Lockdown from the Back to Twister in MMA

When you have your opponent’s back with your two legs or “hooks” in, you are able to ditch one of the hooks and secure what effectively is the lockdown from the back. A few more steps to get a clinch around your opponent’s neck, and you have what is known as the Twister, a painful spinal and cervical submission. The Korean Zombie was able to pull off this Twister submission against a game Leonard Garcia in UFC Fight Night 24.